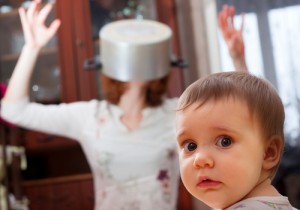 Bush and I were sitting at our kitchen table with the windows open. Next door a tradesman was pouring a concrete driveway for our neighbors.  His kids were with him, playing with a hose around the corner of the house.  You know what happened — water spewed on the wet cement when the kids accidentally diverted it. That didn’t sit well with their dad — at all.

I said to Bush, “That guy yelling at those children scares me.”  Bush said with a small smile, “My mother would say about someone like that, ‘How very uncouth.'”  Unlike my husband, I’m afraid of angry and out-of-control people, even if they’re not angry at me.

Have you read Boundaries by Cloud and Townsend?   Reference this illustration from the book: Three partners of a management team of one company were working on a big project with another company. In the course of the negotiations, the president of the other company got very angry with the trio because they wouldn’t do something he wanted them to do.

Two of the three partners lost sleep, worried and fretted about the breakdown of negotiations, they wondered what they would do if the president of the other company no longer liked them. They finally called a meeting with the third partner to talk about a strategy. They were prepared to change all of their plans to appease the angry man. When the two told the third partner of their plans to “give away the store,” he just looked at them and said, “What’s the big deal? So he’s angry. What’s next on the agenda?”

They all began to laugh as they saw how silly they were being. They were acting like children with an angry parent, as if their psychological survival depended on this president’s being happy.

When you’re eight years-old, your psychologicaL and maybe physical survival does sort of depend on the parent being happy. As Paul shares, “When I was a child, I spoke and thought and reasoned as a child. But when I grew up, I put away childish things.” The season comes though, when it’s time to grow up and understand where one person ends and I begin. I don’t need you to be happy for me to be happy.

The Boundaries section ends with, Remember, God does not want angry people to control you. He wants to be your master and does not want to share you with anyone. He is on your side.

I play to an audience of one. If God is for me, who can be against me?

My husband is like the third partner of the company who seems to know things I have to learn; a revelation of choices some of us didn’t know we had but were explained, maybe by a counselor,  sponsor, or the Twelve Steps.  I am powerless over another person’s anger or unhappiness with me — a  good place to start.

“It is important to remember that the final decision whether to listen to a particular fear or not, is our own.”*