Where I come from — the land of Women’s Clubs and thank you notes on monogrammed stationery — people don’t get tattoos. They wouldn’t know people who do. If an offspring with the lineage described above gets one, well then, someone, somewhere, went very wrong. 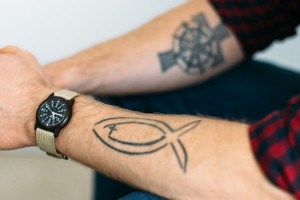 I am a they and my son has a tattoo. He has five tattoos – that I’ve seen, anyway, but I’m getting ahead of myself. As a reward for being high-maintenance in middle school, Ted asked for pierced ears at eighth grade graduation. As permissive parents who had to pick their battles, we gave in.  I didn’t care much about visual issues at that point and Bush – well, his “yes” was the surprise of the century because he’s a guy who won’t wear a pastel shirt that’s not blue if you paid him a hundred bucks. As he used to say to the older boys in response to why younger bro Peter got things they waited longer for, “Because we’re old and we’re tired.” We were already tired, feeling old, and the war was far from over. These things were small potatoes compared to upcoming challenges we faced with Ted on drugs.

Pierced ears and a few give-ins later, the inevitable tattoo happened. “Why did you get the Greek word for faith?” I asked Ted who was spiraling downward with substance abuse at the time. “Someday it will mean something to me,” he said.

Four years later, clean and sober, he designed a compass with a centered cross on the other forearm. “I need one to represent my recovery,” he told me about that well-calculated addition. When his conservative younger brother went to get a Bible verse tattooed on his rib cage (pick a body part with more fat, advises Pete in retrospect), Ted went with him.  “He’ll get another one for sure while he’s there,” friend Courtney insisted.  “Nah,” I said.  Yep.  On his outside forearm was inked a Christian fish.

The Greek word means something to him now. The cross and compass means something to me. The fish is life-giving to us both. Together they tell the story of a God who was there at the start,  stayed,  and remains — always there, every day, one day at a time. That’s my story too.

I see newness in Ted’s face every time I kiss it, but I see the journey on his arms.

Guest Publish: Enable — we do it and spew it.