I have character defects, but lying is not one of them — not intentionally anyway. My mother vetted our toddler-to-teen suspect statements with the very wierd question which she posed with life-and-death seriousness, “Honor bright?”  she’d say.  I have no idea where that lie detector came from but it said that I would not live to see another day if I broke confidence by my honor not being bright.  As hard as I tried I could not take my fib past that guard post. So I didn’t latch on to lying. I can’t do it. 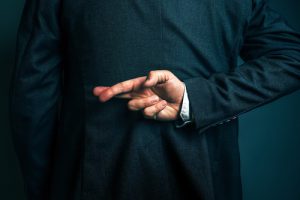 I naively assume that people won’t lie to me either. My lawyer husband reminds me that the possibility exists and by that, I’m astounded. “Really?” I’ll exclaim like the naive five year-old I am.

In the last eight years of recovery I’ve learned that alcoholism lies to me and always has. I believed everything it told me for a long time;  that our son’s addiction was my inferior parenting. That I could fix him with enough love or controlling or something I hadn’t discovered yet. I believed that my dad who died of alcoholism would have stopped drinking if he loved me. I believed that he was inherently a loser. Turns out none of those things were true. Alcoholism lied to me.

Alcoholism and addiction lies to you too.  It tells you the same lies it told me (they work) and initially you might believe them. If you don’t have a loved one in the trap, it tells you that those who are enslaved do what they do all by choice. It says that they are lesser human beings who need a healthy dose of willpower but they don’t want it or won’t use it. It even tells us not to believe what has been proven because everyone with a brain knows that they could stop if they wanted to. It tells us that they actually enjoy their descending, chaotic life and they’d quit if they loved you. They must not love you enough. You must not love them enough.

Others have taught me that I have to practice telling myself the truth when the lies creep in and declare with confidence, “This is all your fault,” or “You are responsible for everyone’s happiness,” or “Everything depends on you.” As my spiritual mentor coyly says to me, “Wow. If that’s true, you have a lot of power.” Insert smiley face with a wink emoji.

No escaping God that I believe things  which usher me into the fright fest of what-ifs, oh-no’s and Overwhelmed Hell. He has an antidote, but to carve new thought patterns takes practice, and I’m lazy and forgetful.

“Intentionally think about what is true“, advises Paul, who once believed he was helping God when he killed Christians. “Make a decision to think about the beautiful, good and happy, not on what’s ugly, scary, and corrupt. Do what I do. It works! Practice, practice, practice and trust me, you will experience the God of peace with you”. (My paraphrase of Philippians 4:8,9.)