Days after we moved in our house, a  woman with gorgeous skin and gray-white curly hair showed up at our door.  She thrust at me a foil-wrapped loaf of pumpkin bread with nuts, and welcomed me to the neighborhood. People don’t do that very often anymore, especially if they live around the corner and two doors down. We became friends. 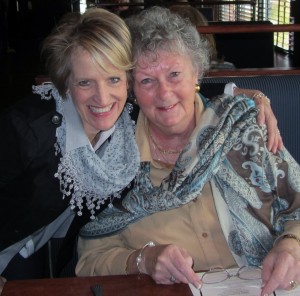 Edie invited me to the opera.  She adores opera, but her husband Frank equated it with what hell must be like and never went with her.  After an hour of The Barber of Seville I had to agree with Frank and although of course I did not say that , she got my vibe because now she invites me to plays.

She is old enough to be my mother, which works well for me because I ask her questions on how to handle various puzzling aspects of life, not because she is old, but because she is wise. Maybe a  little bit because she is old.  She humbly tells me what she would do, or did, and asks later how it turned out. She loves God, makes fun of herself and has great stories, mostly about her two late husbands and the funny things her daughter Meg said before she died of leukemia at age three.

Like most older people I know, she wonders how in the world it is that she’s 84 because she doesn’t feel that age inside.On the way home from our last field trip to a local historic site I told her that I could not get a handle on how to stop wanting something to change about which I have zero power. She called me the next day with a thought.  “Sarah honey, I was thinking that when they ran out of wine at the wedding in Cana, Jesus’ mother went up to Jesus and just told him the facts. Mary said, ‘They have run out of wine.’  Just tell Jesus what you know,” she said, “and then let Him handle it whatever way He wants to. He might do a miracle or He might do nothing.”

Nothing is a good option because not being God myself, I don’t really know that nothing isn’t the best option. If the people at the wedding had had enough wine and it was time for them to go home, Jesus might have done nothing, knowing that running out of wine was the perfect thing to happen at that exact point in the evening. He did hesitate, telling his mom that it wasn’t the greatest time for Him to start doing things only God can do, but okay.  No one knows why exactly He took action, but I like to think it’s because of what I know for sure, Jesus loves moms and of course, this was His own.

Be like Mary was Edie’s point.  Tell Jesus what’s going on and then let Him handle it.  Go back to the party.