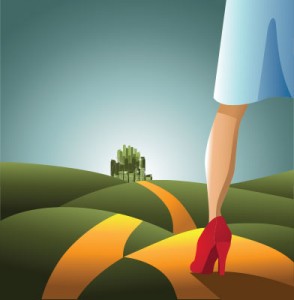 In The Wizard of Oz, Dorothy finds herself swept up in a tornado, lifted and twisted around until she lands abruptly in an unfamiliar place. She is disoriented and confused when she says to her dog, “Toto, I have a feeling we’re not in Kansas anymore.”

As I walked to my car after attending my first meeting of a 12-step program for families of alcoholics, I was Dorothy. “Oh this is special,” I thought to myself as the tears let loose in the dark parking lot. “I have enlisted in a program whose participants’ common denominator is that we love an addict.” What happened to my smaller world where recovery was what one did after surgery, not a discipline to reclaim one’s life from the devastation of substance abuse or the effects of another’s?

Recovery quickly became familiar to me as I continued those 12-step meetings and talked with our son, Ted, about his work to remain drug- and alcohol-free. While 21 year-old Ted looked forward to a one-day-at-a time life, I started work on myself after the toll-taking of growing up in alcoholism and mothering Ted during his years of substance abuse. This is where God had me and as odd as it was at first, I began to embrace it – but only after I accepted it.

One by one in our own way, the Nielsen family embraced recovery. We discovered new and existing friends in recovery who energized us with their stories of restoration. But it wasn’t just their stories that pulled us in, it was the daily spiritual action they took to stay sober. We were allowed a look into the window where God transforms a broken person who has a different sort of illness.

Like some maladies, addiction doesn’t always have a happy ending. In fact, the ending of its threat is the end of life itself. Addicts can’t forget, as Ben B. says, that “while I’m working my recovery, my addiction is out in the parking lot doing push-ups.” They can’t let up with God, for a day, for an hour.

We attended a fund-raiser banquet for Ted’s college campus recovery program for students. In a room with hundreds we sat with other parents who got their children back from addiction. It grew tearful when a graduating student speaker in recovery told the audience of his wish to look his father in the eye and shake his hand like a man. Ten drug-using years of failure and shame made him think that was impossible. One and a half years into recovery and a stack of miracles allowed him to realize that dream and shake his father’s hand that night with self-respect. I watched Ted do it.

Dorothy and I were ripped from a familiar place and flung into whirling chaos, until the drop came in a weird and wonderful location – for me, the Oz of recovery. The odd thing is, I don’t want to go back home. I like it here.