When you write, you look for any excuse not to write and when you finally sit down to write, you think you need lots of long breaks. On procrastination runs and breaks I pull weeds.  Consequently, I am better at weed-pulling than writing.

God refuses to let me get away with slacking off. “Sarah,” He seems to ask me as I yank the dandelions and thistle, “don’t you think weed-pulling is a lot like having a child on drugs?” 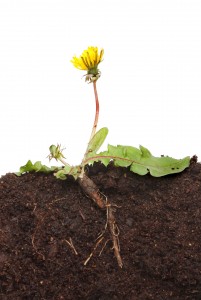 Last year we (by we I mean landscapers) planted a lot of Pachysandra ground cover. In-between those plants is rich, dark, beautiful soil. Weeds dig that soil  (good pun) and every time I go out there to not write, I look at it closely and see new weeds — some are big.  “Why didn’t I notice them last time?” “Is that really a weed with a dainty yellow flower on it?”  “That looks too much like Pachysandra to be a weed.” “That weed is dangerously tangled in the root of the plant.”

There are huge and obvious ones in the sidewalk crack and I can’t get at the root, and then there are the weeds that are strong,  deep, prickly and intimidating. Those require tools.

I think of the weed of genetic predisposition to alcoholism. The weed of trauma, big or small. The weed of vulnerability, depression, the need to belong, to be cool, to fit in, to be accepted, to have fun, to dull pain, to soften disappointment, to relieve boredom, to meet expectations, to talk to girls, to weather rejection,  to feel pretty, to feel handsome, to feign wit and wisdom, to be altered.

As a parent, I scanned for weeds. Some we completely missed. Some we pulled early and got the root but some we didn’t. There were times we knew we didn’t because the blank stare of, “are we done talking about this yet,” was like the snap of just getting the top. Other times it would all come out in tears and remorse like the feel and satisfying sound of long, underground stems and fibers ripping up through dirt to air. But then we’d see that weed again, in the exact same place, only bigger and more resilient to us. We didn’t understand addiction.

Some people understand addiction as much as it can be understood. They know that it’s a physical craving, a mental obsession and a spiritual void that afflicts some but not all. There’s no cure and precious few if any predictors. Those who grasp it as much as possible, get degrees, write books for the rest of us and teach anyone who will listen. Many of them practice daily what they counsel because they’ve been there themselves. Those who recover talk to those still suffering and offer a solution. The Pachysandra can still thrive among the weeds. It learns to tell them who’s boss.

I can get discouraged pulling weeds. I get sick of it and think I can’t do this anymore — what’s the use? The use is that I’m not going to let that garden go, darn it. I don’t want the weeds to win — they don’t have to, but I might have to turn the job over to God and the professionals.

Weeds and addiction will never be eradicated from our earth. But Pachysandra plants are called ground cover for a reason. Like recovery the victor, they deepen and spread and as they do, there’s less, and less, and less room for weeds.